Both software developer and system administrators have no technical possibility to access your data — they don’t have your unique half of the private key. Not only files are encrypted, but also their names are. With Safe App you can securely:

Data is encrypted on your device using HVKM. Then they become .enc files format, saved in a preferred folder. You get a safe storage for your data. You can remove the original file from your device and leave only the encrypted copy in a cloud. 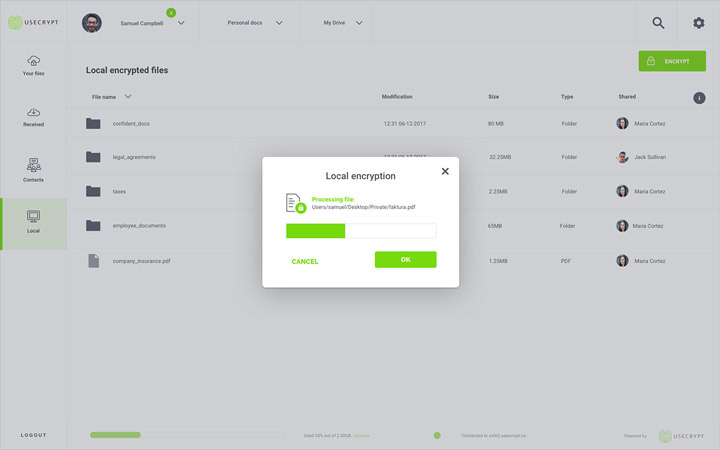 You can send any encrypted file to trusted recipients and track every modification. You are the owner of your data, so you decide who sees it. Files are always encrypted with HVKM and sent via UseCrypt Secure Tunnel. Once they get access to the files, recipients will get informed about it via e‑mail. 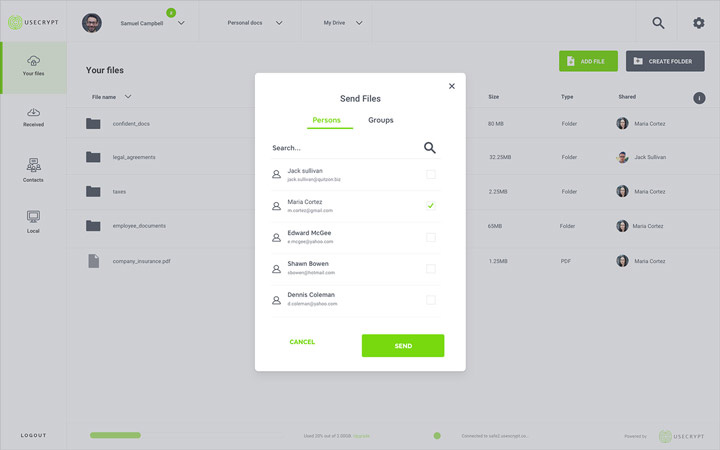 You can effectively and securely share any data within your group of trusted members. You can create larger teams and share specific files within the group. App allows 3 different levels of data access: data owner, operator and user. You can also track every operation made on the file. 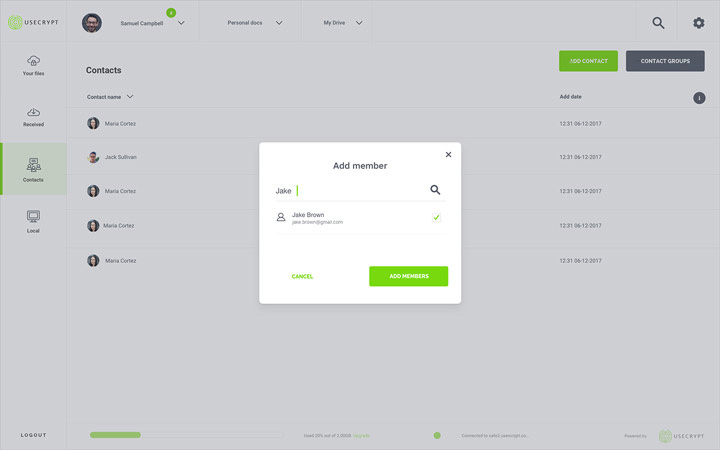 We use well-known, advanced cryptographic mechanisms that ensure the highest level of security. All algorithms and cryptographic protocols have certificates from specialized institutions.

HVKM is our original technology of asymmetric encryption process. You encrypt files with a public key and the receiver decrypts it by using its private key. The private key is divided into two parts. One of them is stored on your device, the other part is kept on the server. To decrypt the file, both parts of the private key must be used at the same time.

E2EE is a system of communication where only the communicating users can read the messages. Your data is always secure, whether you want to store, share or send it via UseCrypt. Only you and the people you choose have keys to decrypt and view the files. It never leaves your device unencrypted – your files are always protected.

Are you familiar with little padlocks that you see in your URL bar? It’s the sign of the SSL protocol and it means that your data is being sent securely. In theory. The SSL protocol has gaps which make it vulnerable to data capture. UseCrypt uses its own communication tunnel, based on strong asymmetric and symmetric algorithms.

Diffie-Hellman is a method of securely exchanging cryptographic keys over a public channel. It’s used in UseCrypt for the first connection between the device and server to establish a UseCrypt Secure Tunnel (based on standards: RFC 2631, IEEE 1363-2000 and ANSI X9.42:2003).

The Advanced Encryption Standard is an algorithm used globally, also known by its original name – Rijndael. It’s a specification used in encrypting data. It’s based on the strongest 256 bit symmetric key randomly chosen by your device (in accordance with FIPS 197 norm, certificate in X.509 form).

Based on verified methods

RSA is a well known and widely used algorithm where the encryption key is public and is different from the decryption key which is private (in accordance with PKCS#1 2.1 standards). This method is used in UseCrypt together with the KEM encryption technique, which eliminates the complexity of the padding scheme.

UseCrypt applies a Message Authentication Code (MAC) to each file. Every file has a randomly designated code. Even if somebody hacks your system, they can’t modify anything without your knowledge. And they can’t modify your file, due to the fact that the key to it is stored and encrypted, and can be decrypted only by your device.

KDF is a mechanism of creating cryptographic keys. It’s an essential component of cryptographic systems that basically takes a human readable text password and turns it into bits and bytes to be used as the key to a cryptographic algorithm (in accordance with the IEEE 1363-2000 standards).

Individual, business and enterprise plans.
Try for free in a 30-day trial and choose the best option that fits you.

Per user, per month

Fully customizable account for personal use and for small businesses.

Need a non-standard offer for an enterprise?
We will prepare a dedicated plan for your organization.

This European Union law will come into force on May 25, 2018. If there is a security breach in data administration, an organisation can be fined up to €20 million. That’s quite a lot. To avoid leaks, data must be encrypted. Efficiently.